2012 was year zero for Olympic Opening Ceremonies. It was only when we saw what could be achieved, we realised what tosh we had been watching prior to this moment. (Well truth be known, we had always known that they were tosh, but we just assumed they could never be better, until Danny Boyle and co. got involved. A bit like we never thought you could make the edges of a pizza edible until Pizza Hut began stuffing them with cheese.) Inflatable chimneys, kids dancing on beds and sky diving monarchs. Yes, the standard had been set high…and surreal. (For a glimpse at the brilliance of it all, watch this edition of Imagine.   It’s ok, there is more Boyle than Yentob in it.)   Anything that was to come after this was going to struggle to compete. The Commonwealth Games tried a bit of Kylie; the World Cup tried Pitbull and Jennifer Lopez; and some just didn’t bother, such as France and the opening to Euro 2016 (for a very amusing take on David Guetta’s contribution, click here). But 4 years on, all eyes were on Rio to see what their Emeli Sandé moment was going to be.

Now Rio had got their excuses in early with the old “we haven’t spent as much money as London” line. There was a rumour at one point that the ceremony was going to consist of hundreds of builders coming into the arena and creating an installation piece called “finishing the stadium on time”. As it happened it turned into “it’s much cheaper to use projections than to actually have to build anything”.

Starting with the positives; there was no Trevor Nelson on the commentary team, just two Scottish people (and Andy Murray was flag bearer. Hmmm, I think since Brexit, anything to do with Team GB will have more of a Scottish flavour so that when it all goes wrong we can slowly morph into one country).    The set was simple, but they could do some amazing things with elastic bands, some boxes from Ikea and a lot of tin foil.

I suppose the big difference is that people (“celebs”) kept coming on to rapturous applause from the locals and we were just left wondering “Who?” I have to confess that I have a pitiful low number of tracks in my “contemporary Brazilian music” playlist on iTunes, so I might be excused. I wrote earlier this year about the joy of watching foreign TV and working out what was going on (you can find the blog here).   Well, this was a bit like that. At one point, Supermodel Gisele walked across the stadium…and that was it. No singing, dancing or a speech. Just walking. Yep at that point I was pining for Mary Poppins. 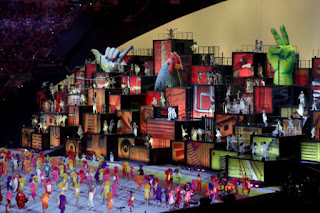 One of the main themes of the games is recycling and sustainability. There was a long section talking about global warming and rising sea levels. Presumably the organisers thought that flying thousands of people from all over the world and polluting the air with fireworks was the best way to get their message over.   What this meant was that every athlete was given a seed which they planted into a giant mirrored cheese grater which eventually turned into the Olympic Rings. As usual it took a good hour to get all the athletes in. During this very, very long hour I made the following observations:

Once all the athletes were in it was a case of get out the Brazilian equivalent of Seb Coe and Boris Johnson; get in the flags; hold the flags and read off a card; get the torch in and light the cauldron. The London cauldron was made out of cups which came together to form a sort of high octane triffid; but in their frugal way Brazil had a small cauldron which used less gas and then in an homage to the 1970’s fuel crisis, hauled it up to the top of the stadium and hung it in front of one of those executive toys which were all the rage in 1973.

The final job of the night was to try and set light to the Maracanã Stadium by blowing the roof off with fireworks. Once that was done, it was back to studio to the lovely Clare Balding. So there we have it. But the good news is that in a couple of weeks’ time, we can do it all again for the closing ceremony. Can’t wait.
If you missed any of the fun and games, you can watch the whole of the opening ceremony here.

This site uses Akismet to reduce spam. Learn how your comment data is processed.